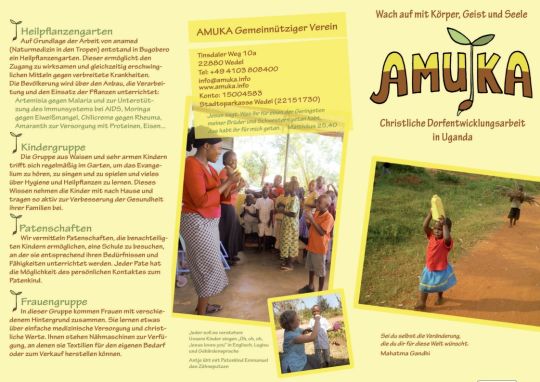 In 2011 our club members Orge and Antje had each been in Uganda for 3 weeks and witnessed new developments in various project areas. The following are excerpts from the second Newsletter.

In January, the team Amuka invited 28 children to a children’s Bible Week. The program consisted of prayers, hygiene lessons, common meals, singing and theatre. Various Bible stories were told with the help of pictures and playfully illustrated by children in games. 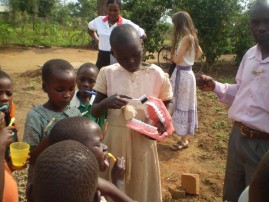 In the hygiene lessons were demonstrated and tried out, among other things, the proper brushing and effective hand washing. For this purpose, it was practiced to build a “tip-tap” with the children. This is a suspended canister with a foot pedal for hand washingis  without having to touch anything with dirty hands. 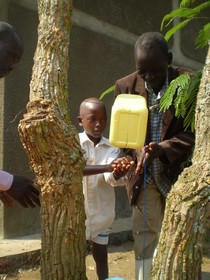 A tip-tap for washing hands

On Sunday afternoon the children like to come to weekly meetings with lname and Philip, where they sing together, play and learn a lot about medical plants and their application. Also in between children come to contribute. 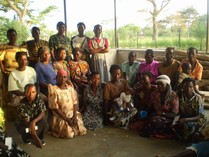 Another focus of this project is the women’s group. It meets regularly and the women learn a lot about natural medicine, medicinal plants and farming methods. There is a lively exchange of views on all sorts of questions. A desire of women is to improve their living conditions by an additional income. 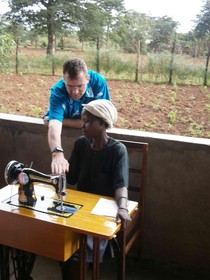 A new sewing machine is tested

One idea was that they can produce garments with the help of sewing machines and thereby generate an income. Through donations from Germany two sewing machines could be purchased for the Amuka-project. Women can use them for a small fee. When Orge was on site at Easter, the machines were just brand new and were adjusted for the first use. For a start, the women also had to learn how to use the machines, including the pedal drive! 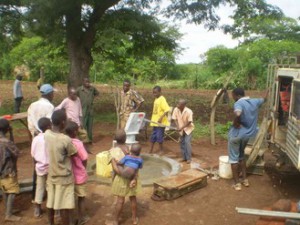 The well is drilled. Here, the first water is flowing

For more than one year we have been waiting for the opportunity to drill a well right in our project garden. And then everything happened very quickly. With the donated money not only the well at the garden could be drilled, but also two other wells that had been broken for several years could be repaired. Much of the money came from the association for the promotion of small-scale projects in developing countries e.V. (VFKE) and a friend. But also the engineer, who took over the drilling, helped us on the basis of his low prices, to build three wells instead of only one with the available amount of money.

For the surrounding villages this means a great relief in everyday life, because now clean water is available a few steps from there! And for the garden project and its employees the water directly in front of the gate is also very important.

Of course also the work in the project garden with its medicinal plants goes on. In March our two main staff members and two additional Amuka project members visited an anamed seminar to learn more about the use and cultivation of medicinal plants and to exchange their views with other similar groups in Uganda. Philip, lname and Jemima are working in the project garden, while Michael already started with the cultivation of some plants in his own garden which is in his village one hour away. In this way the idea of help for self-help is being further promoted.

Through the generous support of VFKE many of these activities were made possible. After the fencing of the land and the planting of medicinal plants also some buildings were financed. A small assembly building with a mini office and warehouse space, a composting toilet and right now also a kitchen house have been constructed. 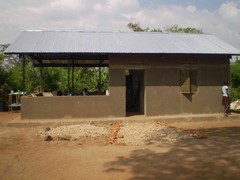 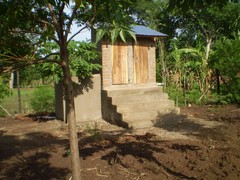 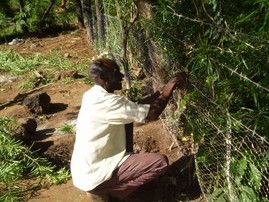 The chicken wire is mounted

Furthermore, the VFKE also financed some smaller but important materials for the daily work:

The work with the women, children and the garden is of course continuing unabated. Our vision and ideas include, among other things, the purchase of another sewing machine, the establishment of the groups in the village, seminars for natural medicine, even better support for children including school assistance and also children’s groups with practical (gardening, hygiene …) and spiritual topics. Caring for the sick should be strengthened – possibly in partnership with a village nurse. A beginning has been made to guide an AIDS-sick couple during an Artemisia therapy. They are regularly visited and their health is documented.

A whole new and exciting idea we have copied from our great partner “Jenga”: In Uganda prices for foods (eg beans) are very low harvest time. Travelling salesmen buy large quantities and store them when they are cheap. At the beginning of the rainy season, when food is scarce and the new crop has yet to grow, these stocks are sold at a greatly inflated price. This makes the poor even poorer, because they get very little for their work, but later have to pay much for the food.

The idea is to build warehouses for the village community. There, the villagers store their harvest themselves and later could sell it at a fair price, either on their own account or jointly with others. The operation of the warehouse can be refinanced through a fair tax for the storage. The construction of such a solid, rat-free and well-ventilated house probably needs some external donations.